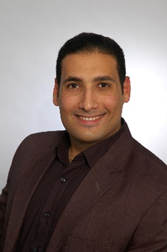 An alumnus of pharmaceutical sciences in July 2003.

An alumnus of an Alexander von Humboldt Fellowship

Dr. Ebaa M. El-Hossary was born in Cairo in 1981. He studied pharmacy at Misr University for Science and Technology and was graduated with a Bachelor’s degree in pharmaceutical sciences in July 2003. In May 2004, he was recruited for a position as researcher pharmacist at the National Centre for Radiation Research and Technology (NCRRT) – Egyptian Atomic Energy Authority, where he completed his Master thesis in August 2007 and then subsequently his Ph.D. work. In less than three years, he received his Ph.D. in pharmaceutical chemistry from Cairo University in April 2010. At this time, he was the youngest Ph.D. holder at his institute.

In 2012, after a highly competitive selection process, he was chosen for the esteemed Alexander von Humboldt Postdoctoral Fellowship and joined his collaborative research project in two institutes at the University of Wuerzburg in Germany; the Institute of Pharmacy and Food Chemistry and the Institute for Molecular Infection Biology.

During his research stay in Germany as a Humboldt Fellow, he was a staff member at the international research project SFB 360 (from September 2012 until June 2015). He conducted research mainly in the development of novel drugs against infectious diseases, and the applications of nuclear and radio-chemistry in the diagnosis/treatment of infectious diseases. His research work outcome was published in different high-impact international scientific journals.

After his return from Germany, he organized several events in cooperation with different German institutes and the United Nations, that promoted the scientific exchange between Egypt and Germany. He was funded twice by the Alexander von Humboldt Foundation to organize two international conferences; German-Egyptian Network for Innovation and Development (in February 2017) and Atoms for Peace (in October 2019). He is also the contact person of the German Academic Exchange Service (DAAD Cairo) at the Egyptian Atomic Energy Authority. He was highly praised for his outstanding work in research cooperation and scientific exchange between Egypt and Germany. In November 2018, his activities were selected by the “European Union-Egypt Forum” in Germany as the best practices of intercultural scientific cooperation between Egypt and Germany.

Besides his research work, he worked also as a Lecturer of pharmaceutical chemistry at the Egyptian Russian University (from 2010 to 2012) and the Modern University for Technology and Information (from 2017 to 2018).